Two Are Better Than One: Expanding Our Covid-19 Vaccine Antigens 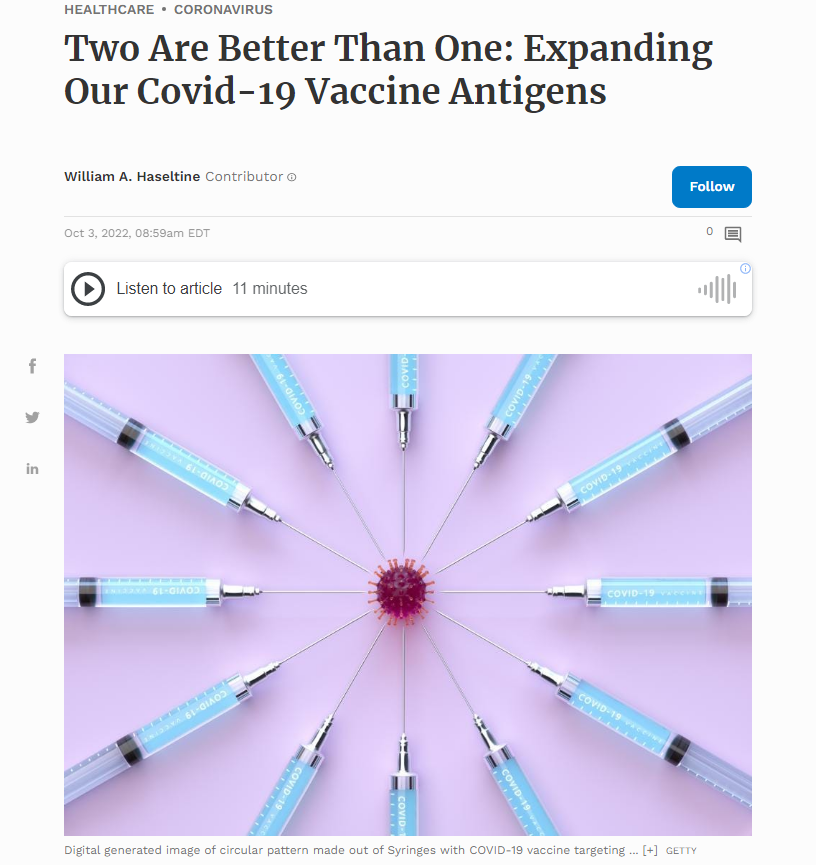 New research published in Science Translational Medicine suggests an mRNA vaccine that targets both the SARS-CoV-2 spike protein (S) as well as the nucleocapsid protein (N) may offer stronger and broader protection than current, spike-only vaccines. This research opens the possibility that one vaccine may protect against current and future variants.

Rationale for Inclusion of Nucleocapsid Protein

One of the most difficult challenges of the Covid-19 pandemic is accounting for the rise of new variants. Successive waves of infection and hospitalization are driven by the emergence and spread of fitter strains. These quickly push out prior strains as they rise to dominance. The Omicron family of viruses has asserted itself as king of the hill in 2022. In large part, this is because the lineage has proven especially adept at evading vaccine induced immunity. And, because Omicron sublineages can be as different from one another as the Alpha variant was from Delta, prior infection with one Omicron virus does not necessarily mean you will be protected against any of its relatives.

Current mRNA vaccines work by exposing our bodies to the SARS-CoV-2 spike protein, which the virus depends on to bind and eventually enter our cells. Antibodies that block the spike protein can block infection. The issue is that the spike protein is prone to mutation — its structure can change a lot without sacrificing functionality. By extension, vaccines based only on the spike protein risk losing efficacy when confronted with new variants.

The nucleocapsid protein is a structural protein with an integral role in viral assembly and the packaging of genetic material (Figure 1). It is 90% conserved between SARS-CoV-1 and SARS-CoV-2, compared to 76% for the spike protein. These two features combined make it a very promising target for vaccine design.

Added to this is the fact the nucleocapsid protein has been shown to elicit a powerful T cell response. Where B cells produce antibodies that can bind to viral particles before they enter cells, T cells are in charge of destroying host cells already infected with the virus; the stronger the T cell response, the better the body can contain the spread of the virus and clear the infection. Analyses of people infected with SARS-CoV-1 have indicated that N-specific T cell immunity can be very long lasting, with some individuals retaining memory T cells up to 17 years after initial infection. These same T cells managed to recognize the SARS-CoV-2 nucleocapsid protein, mounting a quick and specific immune response.

First up, the scientists tested their vaccine for its ability to produce an immune response, known as immunogenicity. For this, they separated mice into a control group, which was vaccinated with a saline solution, and a test group, which received the mRNA-N vaccine. The mRNA-N vaccine was administered intramuscularly in two doses, an initial prime and a boost three weeks later (Figure 2). Two weeks after the booster shot, Hajnik and colleagues euthanized the mice and analyzed their blood, with a focus on T and B cell responses.

Hajnik et al. also witnessed a clear induction of nucleocapsid-specific immunoglobulin G (IgG) antibodies following vaccination. However, although these antibodies could bind the nucleocapsid protein, they did not have any neutralizing potency, meaning they cannot help prevent infection of our cells.

Next, they tested their vaccine against live infection in mice and hamsters. They used the same timeline as they did for their immunological analysis: one prime dose followed by a booster three weeks later. They infected the mice with a mouse-adapted SARS-CoV-2 strain two weeks after administration of the booster shot. They did the same for the hamsters, albeit with the Delta variant, since hamsters are susceptible to wild-type SARS-CoV-2 infection.

Two days post infection, the researchers looked at viral loads in the lungs of the mice and hamsters. Compared to the control group, mice and hamsters vaccinated with mRNA-N showed a reduction in viral RNA and in infectious viral titers. This reduction was statistically significant, but only modest. Curiously, no such reduction was seen when the vaccine was administered intranasally instead of intramuscularly. Intranasal administration also failed to induce any antibody response.

One important drawback is that there was no noticeable reduction of viral loads in the upper respiratory tract following mRNA-N vaccination. The scientists suggest this may be due to the vaccine’s inability to stimulate neutralizing antibodies.

Given their initial success with the nucleocapsid-based vaccine, Hajnik et al. created a bivalent mRNA vaccine that targets both the nucleocapsid protein as well as the spike protein. To test the efficacy of the combination mRNA-N+S vaccine, they compared it to an mRNA vaccine containing only the spike protein (mRNA-S) and to a mock vaccine based on saline solution. Again they used a mouse model as well as a hamster model.

Both the mRNA-N+S vaccine and the mRNA-S vaccine managed to successfully control the infection, with almost no detectable infectious virus in the lungs. A more fine-grained analysis using reverse transcription polymerase chain reaction (RT-PCR) technology revealed that the combination vaccine outperformed the spike-only vaccine; the spike-only vaccine managed to reduce viral RNA copies in the lungs to barely detectable levels, but the combination vaccine was able to completely eradicate viral loads in the lungs (Figure 3).

The vaccines fared just as well against the Delta virus in hamster models. But again, the mRNA-N+S vaccine outperformed the spike-only vaccine, and this time by a larger margin. Where the mRNA-S vaccine managed to reduce lung viral RNA copies 57-fold compared to mock, the mRNA-S+N vaccine managed to do so by 770-fold. Still, both vaccines protected against lung damage, including bronchiolitis and interstitial pneumonia.

Addition of the spike protein to the vaccine also helped improve its efficacy in the upper respiratory tract. As with the nucleocapsid-only vaccine, the spike-only vaccine was not that effective in clearing the virus from the nose and throat, with only a five-fold decrease in viral mRNA copies four days after initial infection. Compare this to the mRNA-N+S vaccine, which already provided an eleven-fold decrease two days after initial infection. This rose to a 98-fold decrease by four days post infection. So, the bivalent nucleocapsid/spike vaccine provides stronger and faster control of SARS-CoV-2 Delta in the lungs and upper respiratory tract compared to the spike-only vaccine.

At two micrograms, the spike-only vaccine induced modest viral clearance from the lungs; a 12-fold reduction in viral RNA copies two days after infection. Little changed with the four microgram dose, which produced only modest viral control very similar to that of the smaller dose. The mRNA-N+S vaccine, in contrast, managed to completely clear viral RNA copies from the lungs by day two of the infection. The same held true for viral titers, with four out of five hamsters having no detectable levels of infectious virus.

Results in the upper respiratory tract mirrored those seen with Delta: the spike-only vaccine only weakly reduced viral RNA copies compared to the mock vaccine. The combination vaccine again outperformed the others, managing to produce a 3-fold decrease in viral copies two days after initial infection. This suggests a combination vaccine may be better suited to reducing viral shedding and possibly onwards transmission of the virus.

This work by Hajnik et al. has laid the groundwork for the development of more broadly neutralizing Covid-19 vaccines, ones that can remain effective even in the face of continued viral variation. Research like this sets us on the path for the generation of a truly universal SARS-CoV-2 vaccine. Successes like these reemphasize the importance of continued funding and research on coronaviruses; the more we know about a virus, the easier it is to produce targeted and lasting interventions. This is true for both vaccines and prophylactic drugs alike.