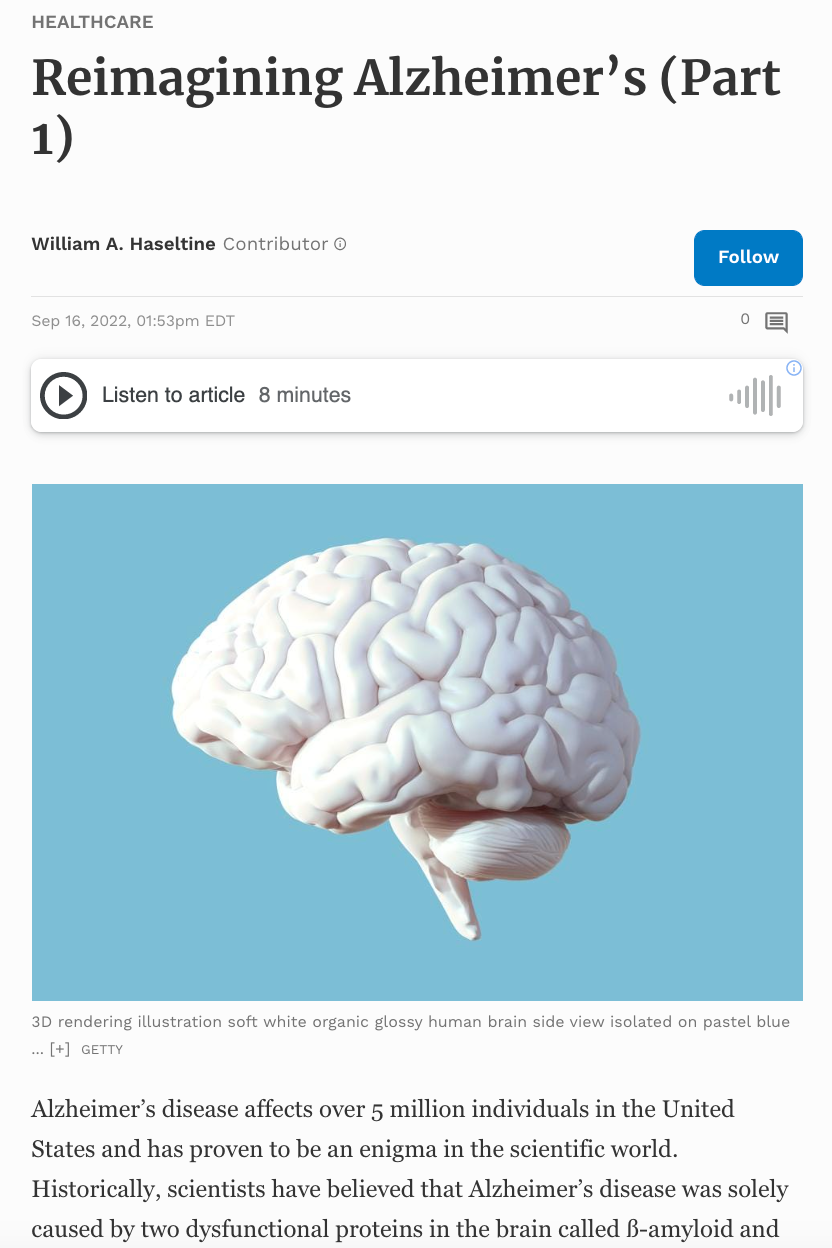 Alzheimer’s disease affects over 5 million individuals in the United States and has proven to be an enigma in the scientific world. Historically, scientists have believed that Alzheimer’s disease was solely caused by two dysfunctional proteins in the brain called ß-amyloid and tau. Now, recent discoveries have thrown into question this fundamental assumption about Alzheimer’s disease and its origins.

For decades, scientists have approached Alzheimer’s research by searching for ways to prevent the unusual activity of amyloid-beta and tau. While several medications and antibody treatments have been developed to intercept the activity of these proteins, many of them are unsuccessful and do not prevent the major cognitive decline associated with Alzheimer’s disease.

Due to this, there are serious suspicions in the scientific world that there may be more to the story of Alzheimer’s than ß-amyloid and tau. In this short series, we will introduce some of the latest interesting work surrounding Alzheimer’s disease, its origins, pathology, and potential avenues for treatment. In the first installment of the series, we offer a brief overview of Alzheimer’s disease in general.

Alzheimer’s is categorized as a specific form of dementia. As such, the most marked clinical symptom of Alzheimer’s disease is a decline in cognitive abilities. This includes loss of memory, difficulty thinking, along with changes in behavioral and social skills that can prevent an individual from living independently. Alzheimer’s disease typically affects the elderly, but there exist rare cases of early-onset Alzheimer’s that impact those in their 30s or 40s.

While Alzheimer’s is often confused with other forms of dementia, it uniquely targets regions of the brain responsible for learning, especially at the onset of the disease. This includes the hippocampus and the entorhinal cortex. The hippocampus is the primary brain region responsible for short/long-term memory and spatial memory. Some of the first symptoms of Alzheimer’s are short-term memory loss and disorientation. The entorhinal cortex specializes in pattern recognition and the perception of time.

Alzheimer’s is also characterized by its very gradual onset and cognitive decline. Most other forms of dementia either involve abrupt changes in cognitive abilities or they simply affect different regions of the brain.

The most recent diagnostic criteria for Alzheimer’s disease suggest that the disease progresses through three fundamental stages: a preclinical period with no obvious symptoms, a middle stage of mild cognitive impairment, and a final stage marked by severe symptoms of cognitive decline. During severe stages of Alzheimer’s, patients often lose their ability to respond to their environment whatsoever and become unable to control their movements. As cognitive abilities worsen, communicating also becomes painful. Ultimately, Alzheimer’s disease is lethal and one of the leading causes of death in the United States.

But what do all these clinical symptoms mean, biologically? The human brain typically shrinks during healthy aging. However, those with Alzheimer’s disease experience a much higher degree of brain atrophy. This is because the primary biological feature of Alzheimer’s disease is widespread injury and loss of neurons in the brain. When individual neurons stop functioning, this impacts the connections between neurons that allow our brain cells to communicate, metabolize, and repair themselves, leading to severe brain atrophy.

One of the primary challenges of Alzheimer’s disease is that biological symptoms often begin to develop during the preclinical period before patients exhibit any obvious cognitive symptoms. By the time patients notice symptoms of cognitive decline and seek clinical help, damage to the neurons has already occurred and Alzheimer’s has taken hold of the brain. This has not only prevented researchers from pinpointing exactly what causes Alzheimer’s-induced brain atrophy but also makes it very difficult to develop preventative treatments.

Despite these limitations, scientists have found that two primary indicators for Alzheimer’s disease progression are amyloid plaques and tau tangles. This discovery is what led to the belief that ß-amyloid and tau proteins are the root causes of Alzheimer’s.

In healthy brains, APP is cut into fragments of protein that specifically contain 40 amino acids. These fragments are called ß-amyloid-40. ß-amyloid-40 is regularly cleared from neural synapses and does not cause damage to the brain.

In those with Alzheimer’s, when APP is cut into ß-amyloid, the ß-amyloid fragments can sometimes be slightly longer than average. These longer chains of protein consist of 42 amino acids and are referred to as ß-amyloid-42. ß-amyloid-42 is chemically stickier and tends to aggregate. When ß-amyloid-42 aggregates, the brain is unable to clear the protein properly, leading to the growth of amyloid plaques that exist between neurons.

Tau tangles, or neurofibrillary tangles, are accumulations of a protein called tau that collect inside of neurons. Neurons contain structures called microtubules that help transport nutrients throughout the cell. In a healthy brain, tau proteins can help microtubules maintain their structure.

In patients with Alzheimer’s, however, tau proteins undergo unusual chemical changes. These changes lead to the tau proteins being unable to hold their own structure or support the microtubules. Instead, the tau proteins become messy tangles that accumulate inside our neurons. Some researchers have speculated that the unusual chemical changes that cause tau tangles are due to specific mutated genes. However, much like amyloid plaques, the exact cause of these changes is unclear.

Abnormal tau accumulation has been shown to increase brain cell damage. Unlike amyloid plaques, tau tangle accumulation continues throughout the course of Alzheimer’s.

While these two features of Alzheimer’s disease are the most widely known and accepted markers for Alzheimer’s progression, they do not paint a whole picture of the disease.

Both amyloid plaques and tau tangles were previously suggested to be the root cause of Alzheimer’s and cognitive decline. Now, more recent research suggests that this may not be the case.

Studies conducted by scientists at NYU Langone and the Nathan Kline Institute in New York suggest that cell damage and disruption occur long before amyloid plaques or tau tangles begin to appear. Other studies have found that some patients exhibit amyloid plaques but no symptoms of cognitive decline. Additional studies have discovered other irregularities in the brain associated with cognitive decline and Alzheimer’s.

Alzheimer’s disease is a pervasive mystery in the scientific community. However, with decades of research and recent innovations, scientists have uncovered several clues as to how and why Alzheimer’s might develop. In the next installment of this series, we will be analyzing multiple theories of Alzheimer’s pathogenesis and the biology behind them.