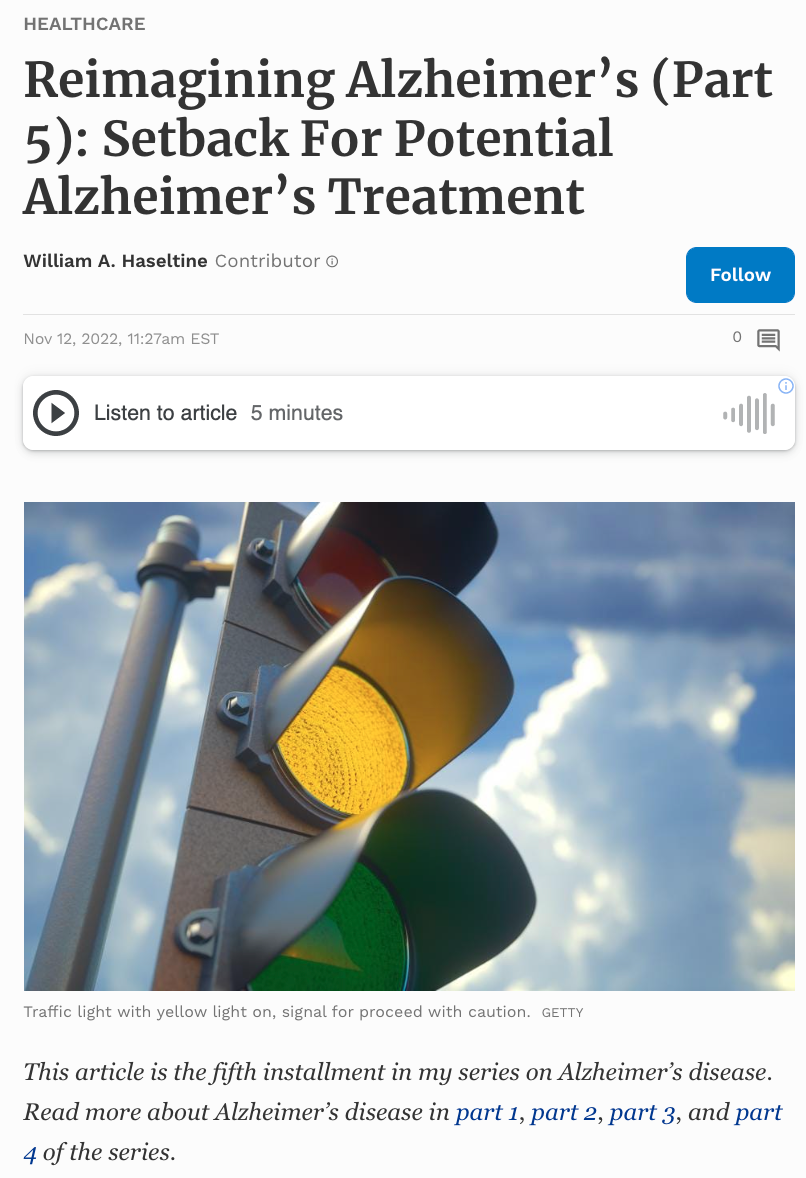 In the last installment of my series on Alzheimer’s disease, I discussed a new experimental treatment for Alzheimer’s called lecanemab. This September, clinical trial results suggested that lecanemab could effectively decrease cognitive deficits in Alzheimer’s patients. Unfortunately, it now seems that lecanemab may have played a role in the death of one of its clinical trial participants, introducing new skepticism as to whether the medication is safe for use.

While the death is still under investigation, this unfortunate event emphasizes that all medications come with their own risks that can be hard to predict. The death was mainly attributed to significant swelling and bleeding in the patient’s brain. The patient was regularly taking a blood thinning medication that may have exacerbated their symptoms.

Eisai, one of the drug manufacturers, was quick to point out other factors unrelated to lecanemab that may have played a role in the patient’s death. In particular, the patient was reported to have experienced several falls, a heart attack, a respiratory infection, and multiple stroke-like events within the past few months.

But how could lecanemab itself have contributed to the death of the patient? Lecanemab works by alleviating the burden of amyloid protein in the brain and is an antibody-based drug. This means that it directly identifies and binds to harmful amyloid proteins in the brain to eliminate them. A significant drawback of antibody-based Alzheimer’s drugs is that they are associated with the risk of brain bleeding.

This is not the first time something like this has happened. When antibody-based Alzheimer’s drugs were first created, one of the major side effects was that a subset of patients developed lesions in their brains. The lesions were generally small but would cause swelling in the brain. This phenomenon was labeled amyloid-related imaging abnormalities (ARIA). As of now, there are several procedures used to monitor ARIA in patients taking antibody-based Alzheimer’s drugs, but because ARIA is typically asymptomatic and rare, it hasn’t stopped the progress of most clinical trials.

Since less than 10% of patients who received lecanemab during early trials developed any sign of ARIA, Eisei and Biogen plan to continue their clinical trials of lecanemab and will now be including patients on blood thinners. This will hopefully allow the biotech and pharmaceutical companies to fully establish what the risks are for patients taking lecanemab, especially patients that represent a more diverse trial population with different pre-existing conditions.

The question that remains is: what exactly does this mean for the development of Alzheimer’s drugs? This recent update in lecanemab’s clinical trials is a setback for the drug, but the search for an effective Alzheimer’s disease treatment is still promising. In 2021, an experimental drug called Aduhelm was granted accelerated approval by the FDA—making Aduhelm the first Alzheimer’s medication in nearly two decades to be approved by the government agency. Like lecanemab, Aduhelm is an antibody-based treatment. The drug works by stimulating the immune system and using the body’s defensive immune cells to target and break down the plaques.

In addition to Aduhelm, Gantenerumab is a promising antibody-based treatment that is in the midst of a long-term clinical study. The overall goal of the study is to follow patients taking the drug over the course of four years to determine how the drug improves memory, daily function, and overall cognition.

Researchers are also developing new ways to approach Alzheimer’s disease treatments. Beyond antibody-based treatments, there are several ongoing studies whose primary goal is to determine whether approved diabetes medications may alleviate symptoms of Alzheimer’s disease.

Why diabetes? In the past decade, Alzheimer’s has been associated with a decreased number of insulin receptors in the brain. Insulin is the primary hormone that controls the amount of sugar in your bloodstream and is a key player in type 2 diabetes. Interestingly, evidence suggests that resistance to insulin may increase the formation of amyloid plaques. Now, because Alzheimer’s disease seems to decrease the number of insulin receptors in the brain, scientists are suggesting that Alzheimer’s may lead to insulin resistance and that this may induce the formation of amyloid plaques and cognitive decline.

In spite of last month’s unfortunate news, there is still reason to be hopeful for the development of effective Alzheimer’s disease treatments. As we continue to probe the mysterious symptoms of Alzheimer’s disease, we come closer and closer to finding treatments that could alleviate symptoms, reduce the cost of care, and help millions of people suffering from this disease.