Reimagining Alzheimer’s (Part 6): The Many Effects Of The APOE4 Variant 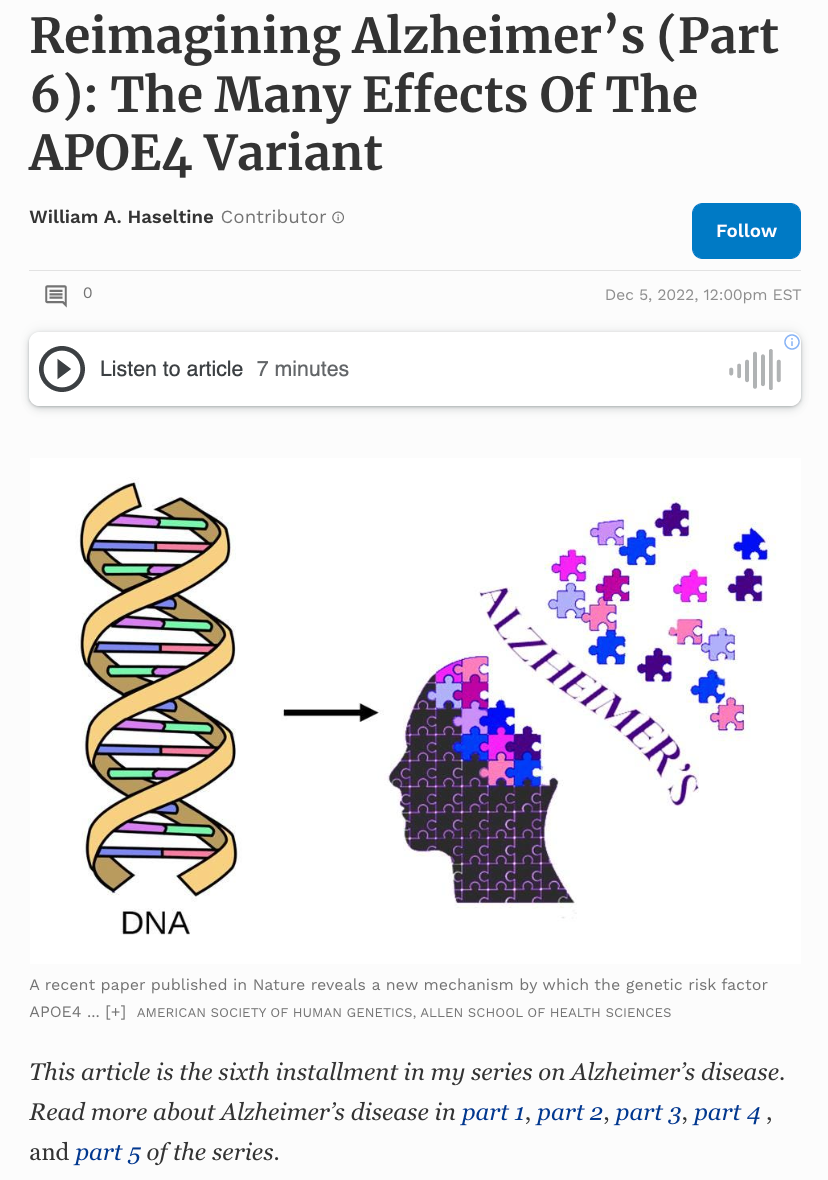 A recent paper published in the journal Nature has revealed a new mechanism by which the genetic risk factor, APOE4, may contribute to Alzheimer’s disease pathology.

Now, studies conducted by a team at the Massachusetts Institute of Technology suggest that the E4 variant of the APOE gene disrupts how fat molecules are processed in the brain. It appears that the disruption of these fat molecules could be the fundamental reason why those that contain the E4 variant are more likely to develop Alzheimer’s symptoms including brain cell death, memory issues, and cognitive decline.

To investigate the role of the E4 variant in Alzheimer’s patients’ brains, the team at MIT began by examining the genetic makeup of thirty-two patients who had donated their brain tissue samples to Alzheimer’s research before passing away.

The first subgroup of donors contained twelve individuals with two copies of the low-risk, E3 variant (E3/E3). The second subgroup contained twelve donors, each with one copy of the E3 variant as well as one copy of the E4 variant (E3/E4). The final subgroup consisted of eight donors with two copies of the high-risk, E4 variant (E4/E4). Only half of the donors in the E3/E3 and E3/E4 subgroups had been diagnosed with Alzheimer’s disease in their lifetime, while all the E4/E4 donors had been afflicted with Alzheimer’s.

One of the primary questions the researchers were interested in investigating was whether the E3 and E4 variants were associated with abnormal cell activity. To determine this, the team at MIT took brain tissue samples from each subgroup and analyzed the tissue with an RNA-sequencing tool. This would allow the researchers to isolate specific types of cells within the brain and figure out which genes seemed to be expressed more or less across different brain cells.

After running their analysis, the researchers found that the E4 variant significantly affected the expression of genes related to intracellular activities. Interestingly, this included increased expression of genes associated with inflammation and other immune-related pathways. Many studies have recently pointed to inflammation as a core feature of Alzheimer’s disease. These studies suggest that increased inflammation in Alzheimer’s patients may be linked to the development of both amyloid plaques and tau tangles and may exacerbate the cognitive symptoms of Alzheimer’s. Researchers also found that genes related to the transmission of information in brain cells were expressed less in patients with the E4 variant.

Curiously, among all the cell RNA tested, differential gene expression was not only found in neurons—the primary brain cells that are responsible for information exchange—but was also found in other cells called oligodendrocytes.

Oligodendrocytes are supportive cells in the brain whose main function is to insulate neurons. Neurons send information to each other through electrical signals in the brain. Much like a wire is insulated to allow for electricity to travel efficiently, neurons are often wrapped with fats called myelin for insulation and to allow information in the brain to travel more quickly. Oligodendrocytes have the essential function of wrapping myelin around neurons.

These unusual results prompted the research team at MIT to explore the relationship between cholesterol, oligodendrocytes, and Alzheimer’s disease more thoroughly. To delve deeper into the biological mechanisms that cause cholesterol to accumulate in the oligodendrocytes of E4 patient cells, the MIT lab set out to use stem cell technology to grow their own oligodendrocytes with either the E3 or E4 APOE variants. In the next installment of this series, we will discuss their fascinating discoveries using this stem cell model and a new route for potential Alzheimer’s treatments.