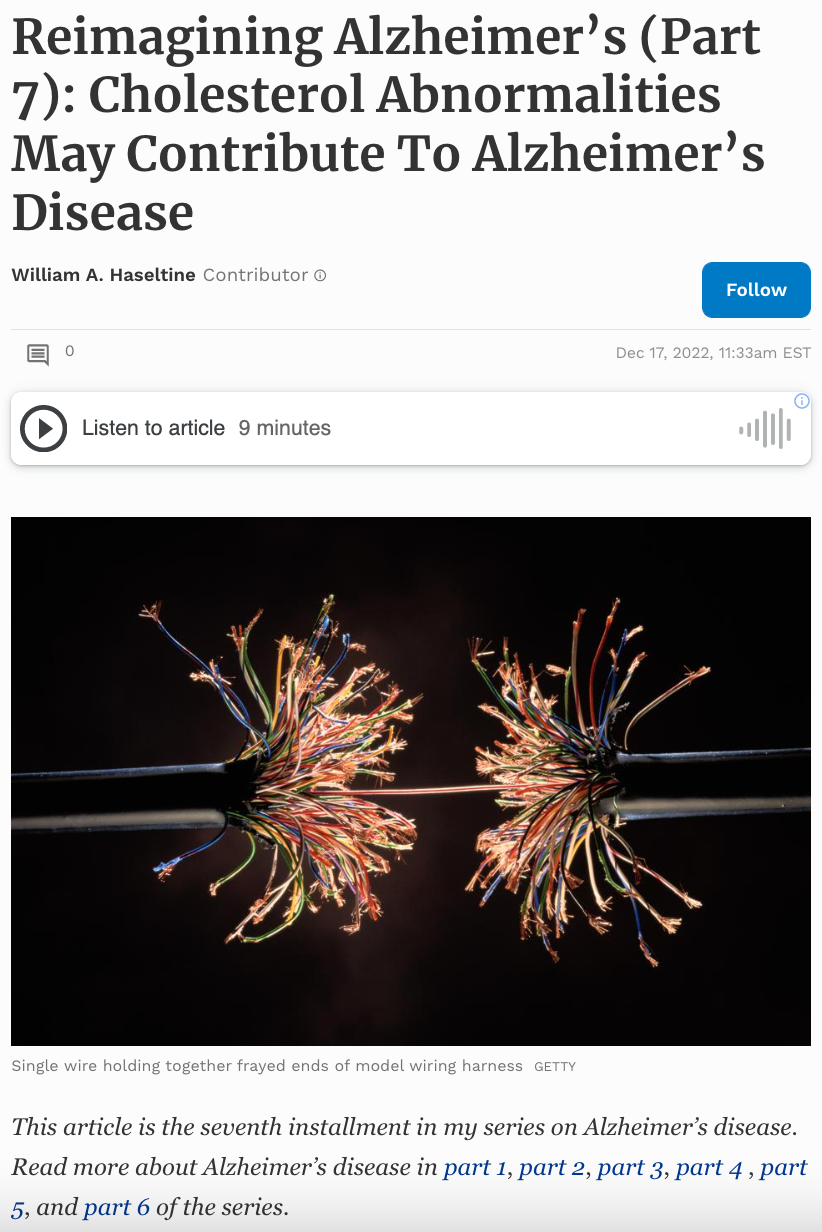 An Introduction to APOE4

Oligodendrocytes are supportive cells in the brain whose main function is to insulate neurons. Neurons send information to each other through electrical signals in the brain. Much like a wire is insulated to allow electricity to travel efficiently, neurons are wrapped with fats called myelin. These fats provide insulation and allow information in the brain to travel more quickly. Oligodendrocytes have the essential function of processing fat molecules to produce myelin for neurons.

Here, we will describe the additional experiments the MIT team conducted to study the relationship between the E4 variant, cholesterol, and oligodendrocytes.

By using a stem cell model, the team could compare the effects of the E4 variant of the APOE gene in cells from a single patient. This would allow them to confirm that any abnormal activity displayed by oligodendrocytes was due to the E4 variant of APOE. Using gene editing tools like CRISPR, the team could also alter the oligodendrocytes so that they expressed two copies of either the E3 or E4 APOE variants.

To examine the effect of the E4 variant in the stem cell model, the researchers first examined the fats present in the oligodendrocytes. Compared to the E3/E3 cells, the E3/E4 cells exhibited an increase in 88 different fat species. Only one fat species decreased within the E4/E4 cells.

The E4 variant, oligodendrocytes, and myelination

Since oligodendrocytes are responsible for myelinating neurons, researchers sought to explore how oligodendrocyte dysfunction may impair its ability to myelinate neurons. Tsai et al. speculated that E4 variant carriers may exhibit decreased myelin production. To explore this, the researchers stained myelin in postmortem tissues from patients that contained a combination of the E3/E4 variants and those who contained two copies of the E3 variant.

The MIT team soon found that samples taken from patients with the E4 variant displayed a significant reduction in myelination. To confirm these results, the researchers then conducted these experiments on mice and found that E4/E4 mice exhibited much fewer myelin proteins than E3/E3 mice. Surprisingly, when inspecting the structure of myelin in E4 mice versus E3 mice, researchers discovered that myelin in E3 mice was much more densely packed than E4 mice, suggesting that there may be structural differences in myelin due to the E4 variant as well as a decrease in myelin production.

Tsai et al. approached this question by using stem cells to form both oligodendrocytes and neurons. The two cell types were co-cultured and grown into 3D tissue that resembled the cellular organization of human brain tissue.

The team created two 3D cultures—one with two copies of the E4 variant and one with two copies of the E3 variant. After observing the model for 6 weeks, Tsai et al. found that in line with their suspicions, the E4/E4 culture produced significantly less myelin than the E3/E3 culture. To determine whether this difference in myelin was due to the oligodendrocytes or due to cellular processes within the neurons themselves, the team then conducted experiments where they co-cultured E4 oligodendrocytes with E3 neurons or E3 oligodendrocytes with E4 neurons.

So, what do these results mean for potential Alzheimer’s disease treatments? Having confirmed that the E4 variant of the APOE gene promotes abnormal cholesterol accumulation in oligodendrocytes and decreases myelination, Tsai et al. sought to determine how these findings may lead to new treatments for Alzheimer’s.

Overall, this innovative and exciting study points to a new theory for how the E4 variant of the APOE gene may induce or exacerbate Alzheimer’s disease symptoms by causing abnormal cholesterol metabolism and myelination patterns. Given the success of cyclodextrin in improving the biological and cognitive impacts of the E4 variant in both cells and mice, it will be interesting to see whether cholesterol metabolism and myelin-based treatments can improve the symptoms of Alzheimer’s disease in humans.