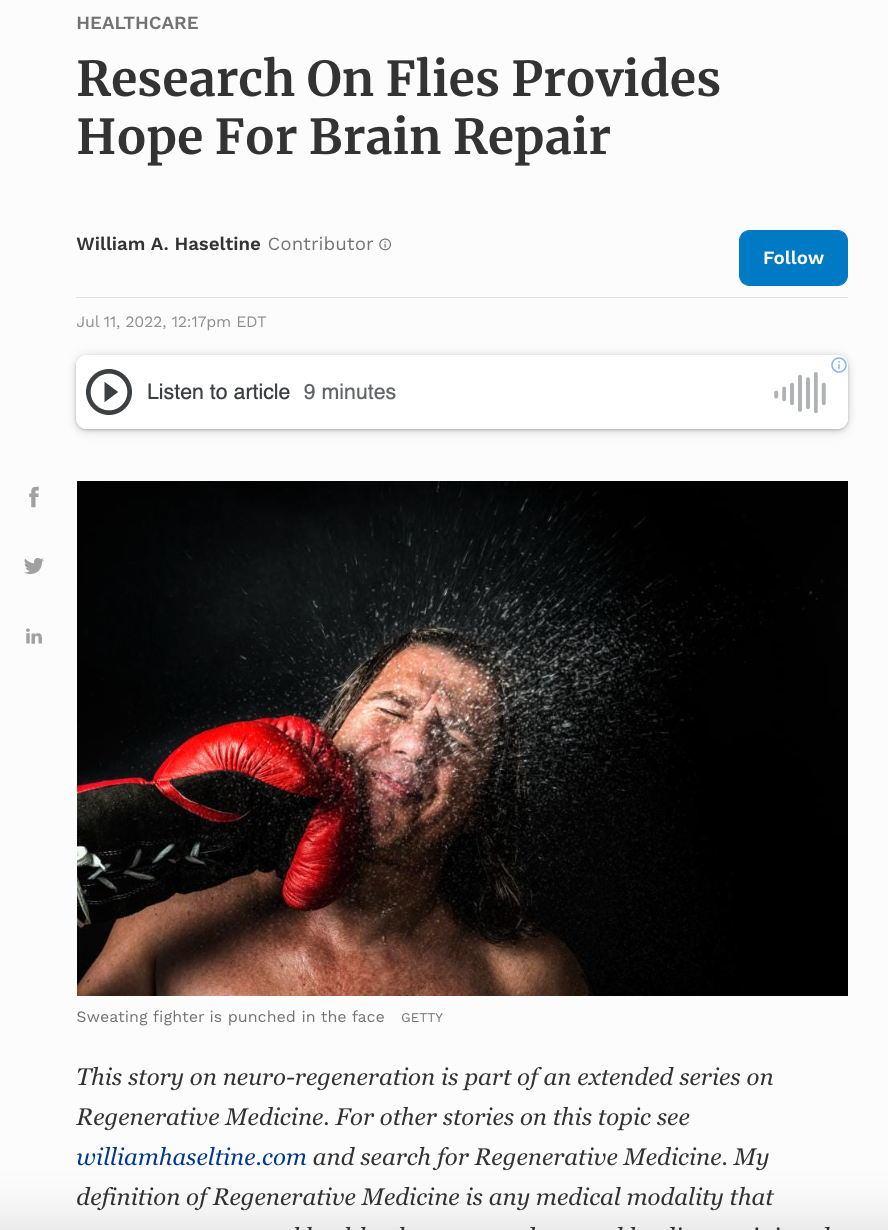 This story on neuro-regeneration is part of an extended series on Regenerative Medicine. For other stories on this topic see williamhaseltine.com and search for Regenerative Medicine. My definition of Regenerative Medicine is any medical modality that returns us to normal health when we are damaged by disease, injured by trauma, disadvantaged by birth, or worn by time. Modalities include: chemicals, genes, proteins and cells used as drugs, gene editing, prosthetics, and mind-machine interfaces.

The Challenge of Brain Repair

One of the most significant challenges in medicine is the ability to repair brain damage. Damaged brain cells do not normally regenerate and can lead to permanent motor and cognitive impairments. The study of brain cell regeneration has been ongoing for many years. However, recent scientific advances using a distant model organism—the fruit fly—may offer a new window into how brain cells could be regenerated in humans.

Fruit flies, while very physiologically different than humans, have proven to be a valuable model for a number of developmental processes in the past. Now, it seems that they may serve as a beneficial tool to study regenerative processes as well.

Studies have shown that the brain contains a natural ability to partially produce new neurons in response to injury. This involves the activation of specialized cells called neural stem cells. Unfortunately, neural stem cells are rarely, if ever, fully activated. This means that while many neurons begin the process of regeneration, only a fraction of fully functional neurons is ever produced.

But how, exactly, does the brain activate neural stem cells and how could we promote this process to increase the brain’s ability to repair damage? A recent paper by scientists at the Champalimaud Foundation in Portugal may bring us closer to the answer. To explore these questions, Simões et al. began by looking at brain injuries in adult fruit flies.

Scientists created small lesions in the adult flies’ brains to determine how neural stem cells would respond. In line with previous studies, Simões et al. found that after inflicting brain injuries, neural stem cells commonly expressed markers of mitosis. This indicated that the neural stem cells had been activated and recruited to repair the injury. Surprisingly, neural activation occurred even though very few activated neurons were in direct contact with the injured brain tissue.

From this, Simões et al. speculated that stem cell activation occurs by distant signals that travel from the injured brain tissue to the neural stem cells. To test this, the researchers used genome-wide profiling tests to determine which genes were most active after injury. They found that there were 74 upregulated and 8 downregulated genes following brain injury. Excitingly, most of the differentially expressed genes were associated with an injury-induced secretome—a set of proteins that is secreted into the extracellular space and can diffuse through the brain to interact with a variety of cells.

One protein detected in the secretome caught the researchers’ attention— Secreted Wingless-interacting molecule (swim). The swim protein specializes in moving proteins from one location to another. Researchers believed that swim may be the key to understanding how injury in one part of the brain can affect nearby cells as well as more distant cells.

To test the role of swim in injury-induced neural stem cell activation, Simões et al. inhibited swim in some flies before inducing brain lesions. After analyzing the number of neural stem cells that had been activated after injury, they found that when swim was inhibited, far fewer neural stem cells exhibited signals of mitosis. These results showed that the swim protein was a critical aspect of neural regeneration after brain injury. But where was swim produced?

Simões et al. noticed that when the brain was injured, a particular cell type jumped into action. These were a type of glial cell. Glial cells have a very diverse set of functions. Along with responsibilities related to immunity and inflammation, glial cells provide physical/metabolic support to neurons and they help with neuron insulation, communication, and the transport of nutrients. Now, it seems that glial cells may also play a role in neural regeneration by producing the swim protein.

The last piece of the puzzle was to determine which signaling molecules swim was transporting to the neural stem cells.

One of the primary mechanisms by which neural stem cells are activated is through the Wnt signaling pathway. Wnt is a family of proteins that exists in both humans and flies. The family of Wnt genes and proteins is important for organogenesis during the process of embryo formation. They specifically activate stem cells to initiate the process of creating new organs. Flies contain a particular type of Wnt protein called wingless (Wg). Wg proteins themselves do not diffuse widely from their place of origin in the brain. How then, is it possible that they may exhibit long-range effects in the brain?

In a second paper published in the Proceedings of the National Academy of Sciences, researchers hypothesized that swim might transport Wg proteins, allowing the protein to send long-range signals.

The researchers first isolated Wg proteins and analyzed them for the presence of any residual molecules that may have been attached to the protein. To their surprise, they found peptides related to the swim transport molecule. Continuing their exploration of swim-Wg interactions, researchers then measured how well the two molecules bonded to each other. In line with their hypothesis, the two proteins bonded very favorably. These two experiments confirmed that swim binds to Wg.

With the knowledge that swim binds to Wg, Simões et al. continued their investigation by exploring how the distribution of Wg protein in the brain was influenced by brain injury. In the absence of brain injuries, Wg is highly localized and is observed in only a few cells. When Simões et al. induced brain injuries, high levels of Wg protein were exhibited in the injured areas. When researchers analyzed the distribution of Wg in flies with or without the swim transporter protein, they found that swim played a crucial role in increasing the distribution and signaling of Wg in the brain.

When these experiments were repeated in mice, researchers discovered that results were consistent. Simões et al. found that when traumatic brain injury was induced in mice, glial cells in the hippocampus were similarly activated and produced increased levels of swim protein. This suggests that the secretion of swim protein following injury is conserved in mammals.

This study represents significant progress in understanding how brain cells could potentially be regenerated. As we continue to grow our knowledge of neural stem cells and their activation mechanisms, we also come closer to developing therapeutics that could effectively treat brain damage. However, more research must be conducted to determine whether this mechanism of brain cell regeneration is consistent in humans. While humans do not contain Wg protein, our bodies do produce multiple proteins from the same Wnt family. It will be interesting to determine whether any of the Wnt family proteins in humans may play a similar role to Wg in human neural cell regeneration.