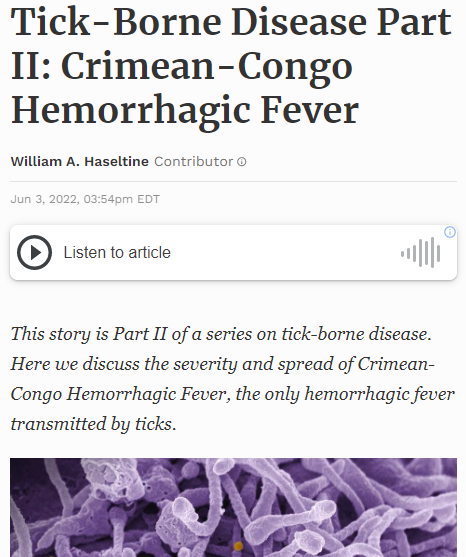 This story is Part II of a series on tick-borne disease. Here we discuss the severity and spread of Crimean-Congo Hemorrhagic Fever, the only hemorrhagic fever transmitted by ticks.

At present there is a serious outbreak in Iraq of Crimean-Congo Hemorrhagic Fever, a rare but deadly tick-borne disease. This is not the first time, as it is endemic to many parts of Africa and the Middle East, but this outbreak is more severe than is usually seen. The World Health Organization received reports from Iraq of 212 cases, 46% of which were laboratory confirmed. There have been 27 fatalities so far, and the death toll is expected to continue to rise.

As of 2020 there were at least 27 tick-borne diseases recognized around the world. Nicknamed the “Nose-Bleed Fever,” Crimean-Congo Hemorrhagic Fever has been around for a long time but is now spreading on multiple continents, including through Europe. Carried and transmitted most frequently by ticks of the genus Hyalomma, Crimean-Congo Hemorrhagic Fever (CCHF) carries a mortality rate often as high as 40%. There is currently no known specific vaccine or treatment. Cases have been documented in many different parts of the world, including Africa, Asia, the Middle East, Russia, and the Balkans. Recent and more frequent outbreaks have occurred in Western Europe, leading the World Health Organization to categorize CCHF as a priority pathogen.

From the family Nairoviridae and order Bunyavirales, Crimean-Congo Hemorrhagic Fever virus has a circular, negative-sense, single-stranded RNA genome. There are three segments, Small (S), Medium (M), and Large (L), each of which encodes different aspects of the virion. The L segment, the biggest, encodes the RNA polymerase, the M segment encodes the glycoproteins, and the S segment encodes the nucleocapsid protein.

While Crimean-Congo Hemorrhagic Fever is only carried and transmitted by ticks, there is diversity in the vectors and targets of other Bunyaviruses. Members of this order can infect arthropods other than ticks, plants, protozoans, and vertebrates. However, the majority are vector-borne, and excluding only Hantaviruses and Arenavirus, all other viruses in the Bunyavirales order are transmitted by arthropods such as ticks, mosquitos, midges, and sandflies. Due to their segmented genomes, Bunyaviruses are capable of swift recombination, increasing the risk of outbreaks. It is possible for Crimean-Congo Hemorrhagic Fever specifically to undergo recombination through the reassortment of genome segments as well as intragenic homologous recombination.

It is thought that Crimean-Congo Hemorrhagic Fever Virus may have evolved around 1500 – 1100 BC. In the 12th century, a reported instance of hemorrhagic disease in what is now Tajikistan is thought to be the first known case of CCHF. During the Crimean War in the 1850s, CCHF was common and at the time known as Crimean Fever. It infected many during the war and according to some reports, this even included Florence Nightingale, who was working as a nurse. Then in 1944, scientists in Soviet Russia identified a disease in Crimea they named Crimean Hemorrhagic Fever. Although scientists were not aware at the time, a virus from the Congo was isolated in 1956, and in 1969 it was determined that these two strands were identical. The hemorrhagic virus was officially renamed the Crimean-Congo Hemorrhagic Fever Virus a few years later.

CCHF is a type of hemorrhagic fever, meaning it interferes with the blood’s ability to clot. Early symptoms are fairly general, consisting of fever, muscle aches, headaches, and dizziness. Nausea, diarrhea, and vomiting can follow, along with agitation and confusion. After a few days as the disease progresses, severe bruising and nosebleeds are common, as well as a rapid heart rate and petechiae, a rash caused by bleeding into the skin. Severely ill patients may experience kidney, liver, or pulmonary failure after the fifth day of illness, and fatalities mostly occur in the second week after onset of symptoms. In patients who recover, symptoms usually begin to improve early into the second week, although recovery is slow.

There is currently no vaccine authorized for preventative use against CCHF. Although there have been several vaccine trials around the world, most have been terminated due to high toxicity and lack of safety. There is also no specific treatment, and care for those infected is primarily supportive. Ribavirin, a nucleoside producing broad-spectrum activity against several RNA and DNA viruses, is an antiviral agent most commonly used to treat Hepatitis C. It has been used to treat CCHF during outbreaks, but the evidence supporting its efficacy is unclear, and it can cause serious side effects such as anemia and liver damage. Due to the lack of effective vaccines and treatments, the World Health Organization named CCHF as a top priority on a list of emerging pathogens with epidemic potential for which there are no medical treatments.

There is great variation in the symptoms and outcome of infection between cases, and the cause for this has not been very well understood until recently. There has been no suitable animal model for studying the disease until recently, adding to the challenges in understanding the virus. However, a study just published in May 2022 has shown important development in the understanding of factors leading to more severe manifestation of disease. In this study, Golden et al. demonstrated both in cell culture and in mice that mitochondrial antiviral signaling protein (MAVS) activation along with cytokine production contribute to the pathogenesis of Crimean-Congo Hemorrhagic Fever Virus, identifying key new targets for potential treatments.

It is mostly people who experience greater exposure to ticks in areas where CCHF is common that are at a higher risk for contracting the disease. This primarily includes agricultural workers, but another common route of exposure is not directly from a tick bite itself, but rather from exposure to the blood of an infected animal. Slaughterhouse workers and those with other frequent exposure to livestock are therefore also susceptible. Healthcare workers in areas where CCHF is endemic who are exposed to blood or bodily fluids without sufficient protections are also at risk for catching the blood-borne virus. However, as climate change results in the expansion of the range for the ticks that carry CCHF and outbreaks become more common, the risk of contracting Crimean-Congo Hemorrhagic Fever increases, as does the importance of developing effective therapies.